I've gotten some questions about how the video in my recent animation article as well as the video of Romain's excellent photo viewing app were created. I thought I'd spend a few words on it in case anyone else wants to do something similar.

First, the reasons I wanted the device:

The solution: an HDMI recorder. The Xoom device on which I recorded the video has an HDMI output port. So all I needed was a device on the other end of the HDMI cable to record that output stream. I picked up an Intensity Pro PCI Express card by Blackmagic, and that did the trick. I installed the card in my Mac Pro, installed the software that came with the device, and it was a simple matter of running the capture software to capture the actual video stream. You can also use other capture software, such as Adobe Premiere, but I found the software that came with the device sufficient for my needs. I did notice an occasional dropped frame (I had to set a setting in the software to not stop recording when there is a dropped frame), but overall it seems fine, at least for my use cases.

Here's a picture of the recorder's box (the card is in my machine and I didn't feel like taking it out). I like the sheer recursiveness here: it's a picture taken with the device of the recorder, uploaded via HDMI from the device to the recorder. I've put some other completely random objects on the shelf with it to give you a sense for its size (small). 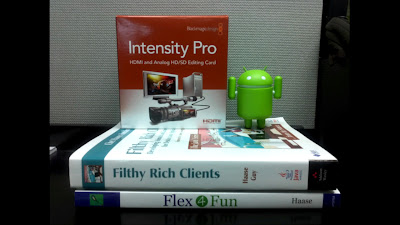 I'm sure there are other solutions out there, but this setup works for me.

This is a really informative post and I appreciate the time taken to put it up. Seems obvious after reading it, so bravo =)

Does the xoom automatically stream the display through the hdmi port or is there something you had to do to get video output? My droid x has hdmi out but I've only been able to get it to work in the gallery.

@Dustin: It just works on the Xoom - plug in the cable, connect it to HDMI output, and the pixels are a-streaming. I don't know anything about HDMI on the Droid X.

@Dustin for the Droid X you can get this app called "RealHDMI" that will do it. It's a bit of a kludge, you have to stare at your HDMI monitor while your finger presses blindly on the Droid X touchscreen, hoping to hit the buttons you see on the big screen. Costs a few bucks but it does work. Sounds like the XOOM is way cooler though.

i am really confused in this method to record..using HDMI..can we try this method as well..
please suggest.

@anju: Not sure where your confusion lies. The device I recorded from has an HDMI output port. I was just trying to describe how I got from that device to recording a video from the device using an HDMI recorder card.

wait... is the card really that small? Or are those books INSANELY BIG??

@Chet This article is a bit old, so I was wondering if you still use the same solution?